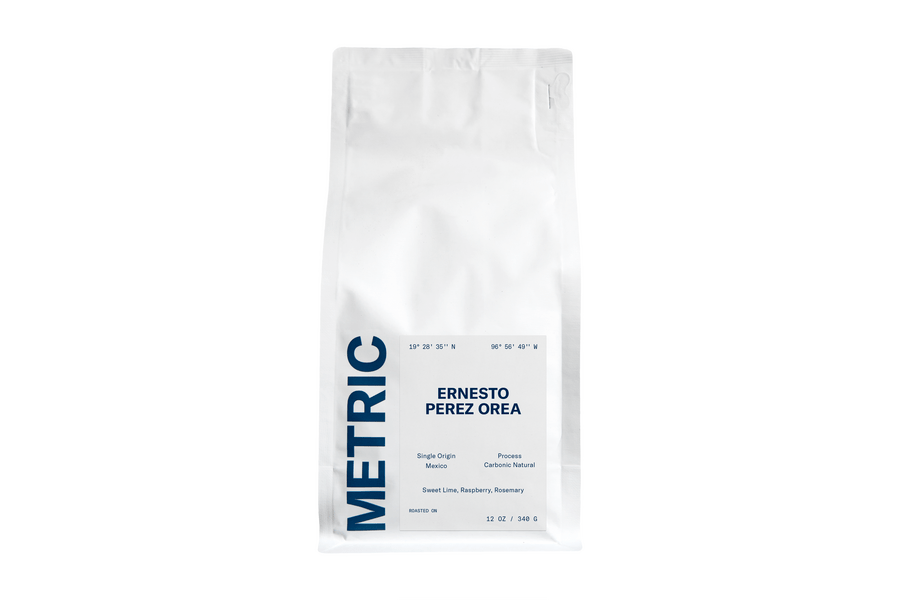 For some time at Metric, we have sought to develop relationships with coffee producers in Mexico. This year, we are very pleased to begin roasting coffees from these new relationships. This lot is a natural processed coffee from Veracruz, which is sweet, with a fruit forward acidity that opens up as it cools, demonstrating flavors of sweet lime, raspberry, and rosemary.

Ernesto Perez Orea is a young, third generation coffee producer in the Coatepec municipality of Veracruz, Mexico. His family began their legacy in the coffee industry in the late 1800’s when Ernesto’s great grandfather, Antonio Perez Galvan, moved from Spain to Veracruz. He spoke English, which helped to get him a job as a coffee trader with a company based out of Texas. Each subsequent generation of the family has been involved in some capacity in the coffee industry from manufacturing coffee processing equipment to farming, processing and exporting coffee. This coffee comes from the farm, Finca Fatima, that the family purchased and began to operate in the 1970’s.


After finishing high school, Ernesto came to the U.S. to study at TCU in Fort Worth, Texas. While in Texas, he took notice of the growing interest in Specialty Coffee which then inspired him to invest his time in learning more about Specialty coffee and pursuing his Q Grader Certification. This then led him to El Salvador to earn his Level Two Q Processing certification, Armed with the necessary knowledge, Ernesto implemented a vertically integrated system at Finca Fatima, overseeing coffee production, harvest, processing, milling, export, and finally import in to the US through the family company APG coffee (named after Antonio Perez Galvan).


Historialy, Fatima’s coffee was used as a high-quality commodity lot until 2018 when Ernesto and his sister Givette decided to enter the specialty coffee market. In 2019, Finca Fatima became a Cup of Excellence winner with a score of 89.41 points using the criolla typica varieties of Coatepec- all thanks to Ernesto’s approach to better farm management and processing techniques. Ernesto has invested in bringing his farm into the future by fully renovating it with new plants, diversifying varieties, and maintaining a shaded environment for his production.


The farm protects the complex biodiversity of the region which constantly regenerates nutrient rich soil and wood fruit trees that provide both shade and shelter to a wide range of bird and animal species. The farm also hosts two water springs, endemic flowers and ancient tree ferns native to the mesophilic forest. Ernesto’s vision focuses not only on coffee quality, but also on soil preservation, carbon sequestration, and retaining and improving local biodiversity. Geographically speaking, Coatepec has some of the highest latitude coffee on the globe: just like high elevations yield slow cherry maturation due to cooler weather, Coatepec is nestled on the northern edge of the tropics, where cooler, slightly wetter weather and long, cool nights during the harvest slow down cherry ripening, creating an incredible density of flavor.