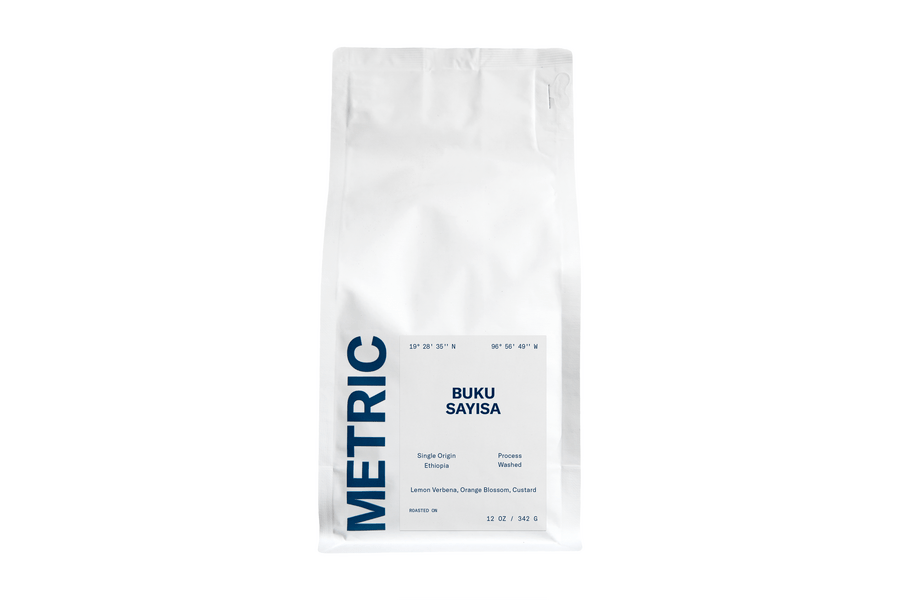 Grown in one of the highest altitude coffee growing areas of Ethiopia, this coffee bursts with bright citrus aromatics, tropical and floral flavors, and a sweet, creamy body.

Like so many in the coffee industry, Esayas Beriso began his career in an unrelated field, working in a government office in Dimtu. During this time, he and his brothers began a small operation of collecting area farmers' red coffee cherries and selling them to local wet mills.


As this operation grew, Esayas planted his own coffee trees. In 2009, he left his government job behind to become a full-time coffee business owner. His wife, Meskerem Tomas, manages the harvesting operations on Buku Abel, their nearly 40-hectare farm. Esayas and Meskerem have two daughters. This young entrepreneurial family is optimistic about the future of Ethiopian specialty coffee.
In keeping with the original business model, Esayas and family also purchase cherries from outgrowers, or neighboring farms.


The coffee cherries are collected manually and hand-sorted. They are then wet-fermented for up to 72 hours, washed in channels, and graded in water by density. The lower-density beans will float and are removed, leaving only the denser and therefore higher quality beans which are separated as higher-grade lots. After fermentation, soaking takes place for two hours. The coffee is then piled into two-centimeter layers and dried over a ten-day period, followed by hand sorting.


The Dega variety originated as a Gedeo local landrace, which is a variety selected from a wild coffee population that has adapted to its local environment and conditions. The literal Amharic translation of "dega" means "highland and cooler areas", which is consequently where this variety is often grown. As an official Jimma Agricultural Research Center (JARC) selection, this particular variety is likely genetically similar to the historical Dega local landrace.